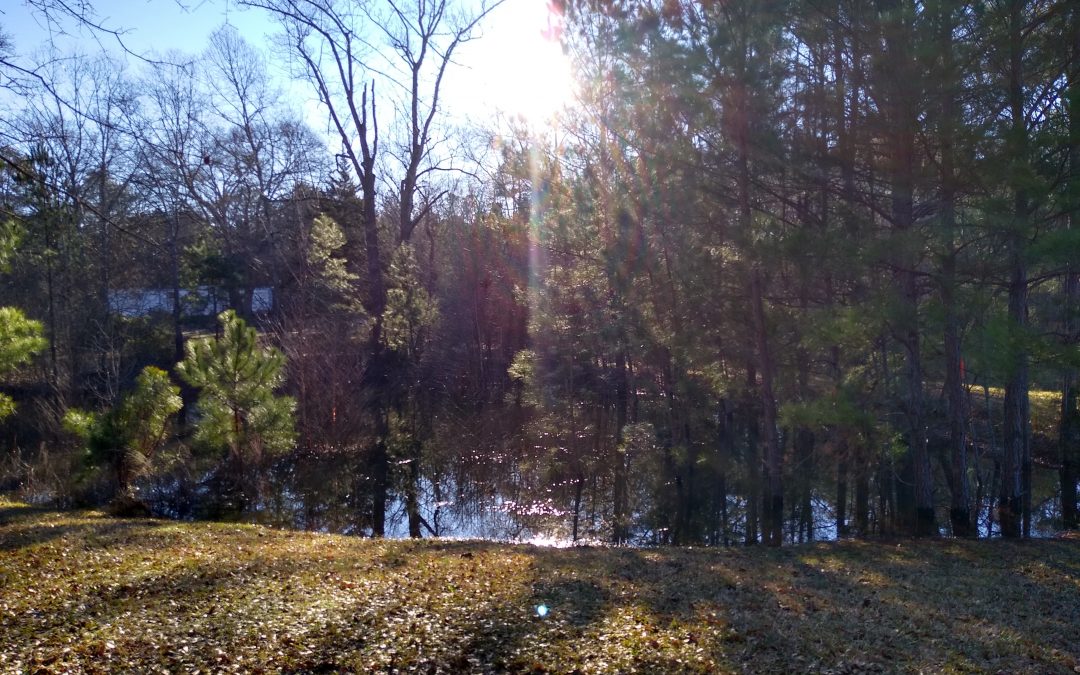 What you are about to read is being published by special request. The blog, as it is now, was once a column in the newspaper. My Christian conservative views got it canned and it was “dormant” for a while. Rambling On came alive again and this chapter, Night Song, was the first after a long silence. The Lord woke me up at 2:00 in the morning to write and for those who know me, I am NOT a morning person. I KNEW this was from The Father. The column was picked up again by a web site in Virginia. That web site went under and again, Rambling On was dormant. Now, yours truly is my own web master and this particular chapter just holds a special place in my heart. My thanks to my sister, Linda, for requesting it. I pray you enjoy it.

Moonlight plays across the surface of the pond much like a silent instrument, its beauty – purely visual. The wind strokes the water with the same caress as a mother with a newborn infant. The muted color of the amber liquid throws back a garbled reflection of a full moon. Shadows hug the bank as only a shadow can in the twilight of a Summer night. The shadows were created this night by a glowing round disc.

Night. All is calm and the serenity of this place permeates my being. When so many search for peace and rest, I have only to sit on the bank and drink in this tonic of tranquility.

Tree frogs join in a chorus with the spring peepers. A melodious song so in harmony with the breeze in the trees. What more could I ask for? Such therapy can only be found here. Who needs a psychiatrist’s couch when I have a clump of cool green grass? Some of the best therapists in the world are of the K-9 variety. This outdoor office is very affordable and even when my therapist jumps a rabbit, I really can’t complain. The only “overhead” here is the trees over head!

A cross-tie floats on the surface and looks very much like an alligator. Wouldn’t that be an adventure? Jonah gets a whale and this would-be writer gets a gator? My imagination has run amuck.

A train whistle in the distance reminds me that civilization isn’t far away. The hum of traffic on the interstate is muted, and seems to lend its own musical notes to the evening. Have you ever listened to a train whistle and wondered where it was going and where it had been? What musical sounds does the engineer hear as his massive machine clamors ever onward over those glistening metal rails? Does he hear the song of the night? Maybe he can feel it in the clackety clack of the wheels turning and turning and moving him closer to his destination.

The song of the night plays every night, every where for every one. Whether you live in a busy town with some vocal neighbors or a quiet sub-division with a not-so-quiet dog living next door. In town or in the country, the song plays on. When was the last time you heard it?

Take a moment tonight to turn off the TV and step outside and listen. You may be surprised. 🙂

The smell of honeysuckle clings to the night and you can feel the moisture of a fog just rolling in as it purrs against your cheek. The song is playing tonight. Nature’s lullaby. Rhapsody in hue – hues of gray and silver. A Summer sonnet. When was the last time you heard it? Take the time. Make the time. It’s cheaper than “the couch” and I love the over-head!

Until next time, y’all be blessed.