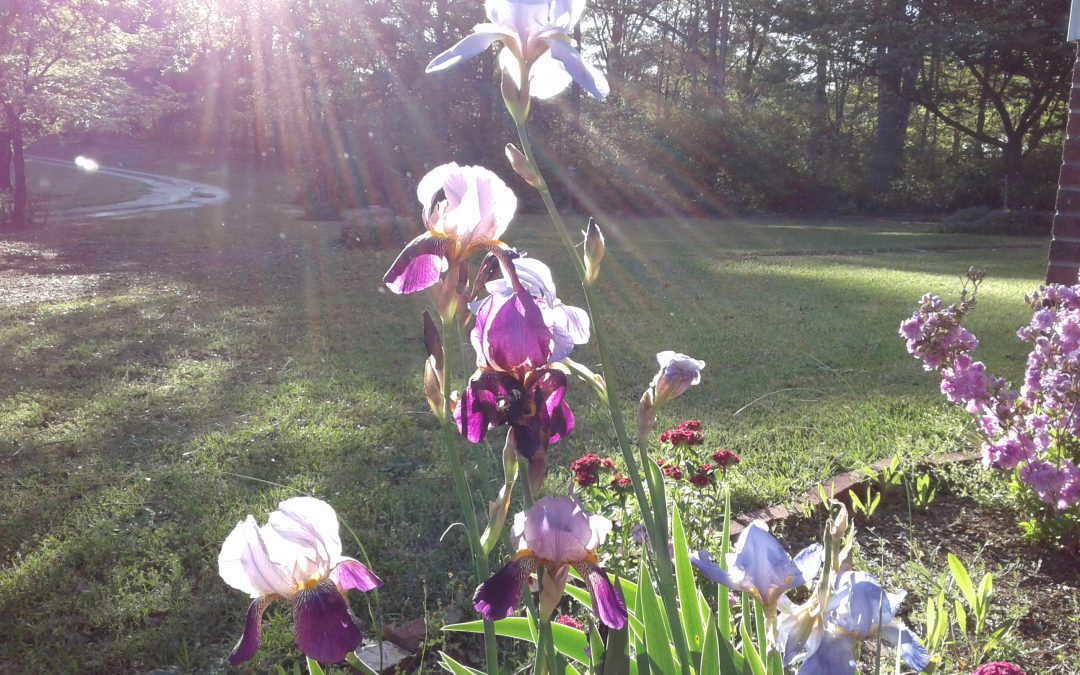 This wandering gardener visited a place today that looked like an iris farm. I’ve never seen so many irises, not even in a large greenhouse.

It was my pleasure to ride shotgun in the Kabota with a delightful lady named Minnie. She and her small dog, Wolf, were my tour guides. Truth be told, Wolf was keeping an eye out for a chipmunk or squirrel.

There were white, blue, purple, peach and a funky yellowish variety that I’d never seen.  Minnie told me that this particular color started out green and the bees have cross-pollinated it until now it was more yellow than green. It was the strangest color I’d ever seen.

I learned that my one non-blooming plot of iris are getting too much shade. That can be fixed. Iris like bone meal. That can be added.

Minnie advised me to come back tomorrow and to wear some shoes with socks. Knee-hi panty hose just won’t cut it. She said, “Ugly shoes are what you need on a farm.” I just happen to have a pair that qualifies.

Riding around the property, it was a visual frenzy to take in such a riot of color. I had stopped to price the iris for sale but the peonies were not to be overlooked. Heavy-headed and leaning toward the light, their Southern charm was on full display. 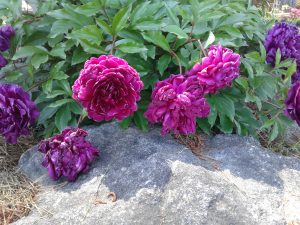 The Dutch Iris were a veritable pool of purple joy.  They may look blue in this photo, but trust me, they were a magnificent royal purple. This photo simply doesn’t do them justice.

This picture makes me long for the days when I had an old-school 35mm camera. Load the film. Take pictures. Use a dark room to get the film developed.  #memories

Minnie drove me across the property to the edge of a large garden plot. A chain-link fence marked the perimeter and all the way down were large trees and dozens of iris plants. My new friend announced, “These are the throw-aways.” To which I asked, “What do you mean throw-aways?” She said when the iris are thinned and weeded, these were literally thrown away and here they continue to bloom. The flowers were smaller, but I saw two or three that would certainly be following me home.

After I got back to my house, it occurred to me to call my friend Retta. She loves iris and she and I have had so much fun rambling around on these eight acres. She’s not in a position to have to maintain a lot of flower beds and it’s been a blessing to me to share with her what’s growing and blooming in my yard. We made plans to meet the next morning at the “iris farm” and I’m anticipating more fun. Sharing flowers is just a treat. 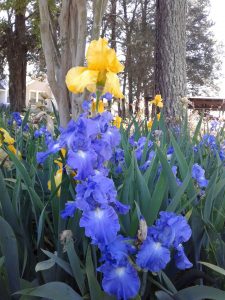 Retta met me at the iris farm and Minnie educated me on just how to dig and divide an iris. (Ugly shoes at the ready.) The throw-aways were free so we started there. I chose a few as did Retta. Then, when I went shopping for the ones I would buy, Minnie told me again that it was $3 per dig, not $3 per plant. Being a visual learner, it made more sense when the plant came out of the ground and when Minnie looked at it, she would show us where it could be divided, IF dividing was possible. If it was possible, there would be maybe three or four plants from just one “dig”. Now it made sense. 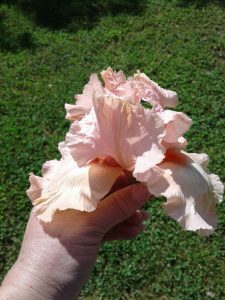 One of those that didn’t survive the “dig”. No stem meant no vase. 🙁

If only they would bloom longer. 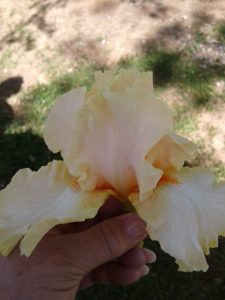 When the first plant came out of the ground, my hostess told me, “It’s gonna break your heart, but…” she proceeded to explain that because these vertical gems had been disturbed, they could not survive if they had to focus on making more flowers. The iris would need to be “fanned” or trimmed. It was best to trim the leaves and remove the flowers so the iris could spend its energy on settling in at its new home. 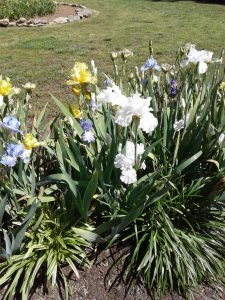 A two-tone touch of beauty. And yes, it came home with me.

May has officially arrived and it’s a sure bet that warm nights and warmer days are staring me in the face. I guess my fake-tanned legs can now be seen in public. (grin)

In spite of the heat, planting so many tubers without any flowers made me think of buried treasure.  These shapeless things would produce something spectacular next year. 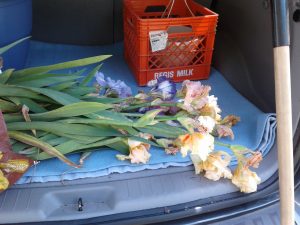 I keep an old blanket in the back of my car. It makes it easy to haul stuff and then the blanket gets washed. 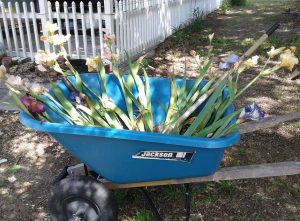 Something about the dappled light made this picture worth sharing. I really hated having to cut all those flowers off. 🙁